The setup from researchers at several universities in China uses a handheld, pencil-like spectrometer to scan objects; the data are then wirelessly sent to a smartphone for processing. [Image: Adapted from F. Cai et al., Optica, doi: 10.1364/BOE.8.005427] 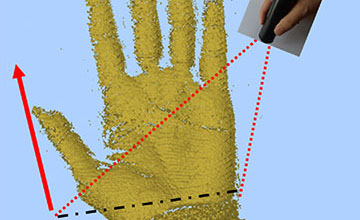 As powerful, sensor-rich computers that fit in a pocket, smartphones have increasingly found themselves pressed into service for applications well beyond checking email or Facebook. One good example is spectroscopy: a variety of schemes have emerged to combine diffractive elements with smartphone cameras to create spectrometers for rough-and-ready field use.

A research team from several Chinese institutions has opted for another approach to smartphone spectroscopy (Biomed. Opt. Express, doi: 10.1364/BOE.8.005427). Instead of tricking out a smartphone with additional optical elements, the researchers have put the camera and spectroscopic elements together in a stand-alone, pencil-like, WiFi-enabled pointer—with the smartphone used to wirelessly receive and process the spectroscopic data. The team believes that, as refinements are added and as the software component benefits from machine learning, the device could ultimately find use in a variety of point-of-care and field applications, from measuring oxygen saturation in patients’ blood to assessing the ripeness of a batch of fruit.

To build the device, the team put together a variety of components—an imaging module consisting of an imaging lens and a 60-μm slit; a diffraction module including a doublet lens and a prism-grating-prism stack; and a detection module including additional lenses and a WiFi-enabled CMOS camera chip. These modules are laid out shotgun-style in a 3-cm-diameter tube that fits easily in human fingers. A white LED array at the head of the tube illuminates the sample at a 45-degree angle, and the reflected light is split up and spectrally recorded within the tube, with the data then beamed to the smartphone for processing. The total cost of the components, according to the team, adds up to less than US$300.

According to the study, the device can detect spectra in a wavelength range between 400 nm and 675 nm, with a wavelength resolution of around 17 nm. The researchers tested the device in experiments distinguishing between green (unripe) and ripe bananas (using the amount of chlorophyll in the bananas as a proxy), and in determining the amount of the myoglobin protein in pork samples.

They also were able to use the device for “pushbroom” scanning across a human hand, with the camera in video mode. This allowed creation, in 16 seconds, of a multispectral-like data cube. And, while “image blur and distortion were inevitable” given that the tool was hand-controlled, the team was able to distinguish the five fingers and palm in the data, and to draw conclusions on blood-oxygen saturation from the spectral data.

“Pushbroom” scanning across the subject’s hand (left) allowed video capture of 200 spectral images that could be rolled up into a data cube (center) and used to study blood concentration (right). [Image: Adapted from F. Cai et al., Optica, doi: 10.1364/BOE.8.005427]

The researchers argue that the pushbroom tests in particular suggest a role for the device in point-of-care settings as a biomedical sensor. And they believe that its application space could expand significantly with planned improvements over the prototype device. For example, the team suggests that using an infrared camera could improve the device’s penetration depth, allowing for its use in studies of deep tissue. And plans are afoot to swap out the off-the-shelf CMOS camera used in the prototype with a custom-made, longer-focal-length WiFi camera element. Such a change, the researchers believe, could significantly improve the pencil-like device’s spectral resolution.

There’s also room for improvement on the software side. Sailing He of Zhejiang University, a member of the research team, noted in a press release that the researchers “want to develop ways to use machine-learning algorithms to analyze the massive amounts of data that could be collected with the portable spectra imager.”