In the pipe clay soil deformation monitoring test, cohesive soil was added to the test box, four sensing fibers were buried and finally the box was left for three months to form a test model. 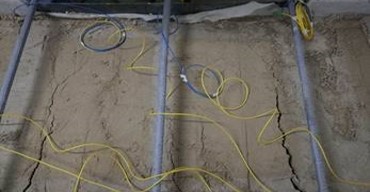 In the test, the jack applies thrust to the central clods step by step, and a displacement gauge is placed on one side of the clod to measure the displacement of the clods, and the strain is measured by OSI-S.

The measurement result of one of the optical fibers is shown in the figure below:

At each stage of loading, the strain distribution measured by the fiber is basically the same. The strain at different positions is related to the strained condition of the soil. The thrust law of the pipe soil under the state of horizontal displacement can be explored according to the real measured value.